The Bate Collection contains a number of bass brass instruments of the 19th and 20th centuries.  These include tubas, euphoniums, helicons and sousaphone.

The tuba is the deepest of the modern, valved brass instruments. it was invented by Prussian makers Wilhelm Friedrich Wieprecht and Johann Gottfried Moritz in 1835 and was inspired by and drew on the features of the serpent and the saxhorn. Originally the tuba was primarily a military instrument and was particularly popular in marching bands before 1900. Nowadays it is used across a wide variety of musical genres, including the large romantic orchestras. It gained a certain amount of fame as a solo instrument when it featured in the Gerard Hoffnung concert series during the 1950s and early 1960s. 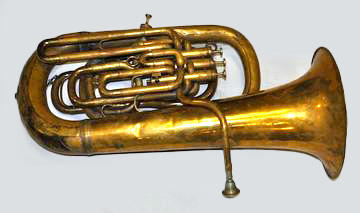