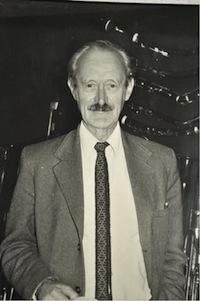 Generously supported by the Patricia Baines Trust, this project is now in phase 2, moving focus from the document archive to the musical instruments themselves. During the first phase of the project the entire archive was catalogued, and scans were made of approximately 80% of the documents (this work will be completed when we can safely access the building once again). In August 2019 we hosted a conference at the Bate Collection, on Collectors and Collections of Musical Instruments, at which Dr Alice Little spoke about Anthony Baines. A catalogue of the Anthony Baines Archive will be published in 2021.

Anthony Baines is best remembered, especially among fellow organologists, for his books on woodwind and brass instruments, and for his many articles in the Galpin Society Journal on a range of topics.

From its inception in 1970 until his retirement in 1982, Tony Baines was curator at the Bate Collection, which was at the time located on Holywell Street.

Beginning with the collection of woodwind and brass instruments donated to the University by Philip Bate, by the time of his retirement Baines had, in Philip Bate’s own words, ‘enlarged its scope and content and created a unique resource centre for the practical study of musical instruments of all periods’. Philip Bate went on,

His writings are chiefly concerned with instruments, particularly wind instruments, and their history, however, as a man of many parts, his career encompassed several diverse fields. As an organologist of world rank, his writings are informed by a rare combination of enthusiasm and authority, backed by an unrivalled range of practical experience and research. Some of his books are now standard texts, and many have also appeared in German and Italian. The American Musical Instrument Society presented the Curt Sachs Award to him in 1985 for his contribution to a ‘fuller understanding of the parallels and interactions between folk and art traditions’.

Dr Alice Little is a Research Fellow in the Music Faculty, with responsibility for the Anthony Baines Project at the Bate Collection. She is also a Junior Research Fellow in Muisc/History at Corpus Christi College and a Humanities Knowledge Exchange Fellow.

Alice's research focuses on collectors and collections of music and musical instruments. Her DPhil focused on the tunebooks of J. B. Malchair (1730-1812) and her MSc on the musical instruments collected by Percy Manning (1870-1917). You can read more about Anthony Baines and the document archive he left to the Bate in Alice's catalogue of the archive, which will be published in 2021.

The Anthony Baines Archive at the Bate Collection of Musical Instruments contains detailed research and historical documents on a wide range of subjects, including how various musical instruments were made, the history of orchestras and their instruments, and the development of the discipline of organology (the study of musical instruments) in the period after the Second World War.

Although today we remember Anthony Baines primarily for his work on woodwind and brass instruments, the Anthony Baines Archive contains unpublished musical research covering a wide range of topics and periods: from European woodwind to Chinese strings, and from the Middle Ages to the modern day. The archive also includes reproductions of art works featuring musical instruments and correspondence relating to Baines’s publications and research. In addition, the archive contains glimpses into Anthony Baines’s life, including his botanical notes and drawings, his war records, and compositions and arrangements written and performed in the Chieti prisoner-of-war camp.

A full illustrated catalogue of the collection is available to pre-order now. Details to follow.