In 1963, Philip Bate generously gave to the University of Oxford his extensive and systematic collection of European orchestral woodwind instruments. Subsequently he continued to augment the Collection with gifts and loans, both of woodwind and brass. As a result of his original conditional of gift, that students should be able to play these historic instruments, the Bate Collection is unique in that many of its instruments are used. Philip Bate's friend and colleague Reginald Morley-Pegge both gave and also permitted instruments to be bought from his collection. After his death in 1972, his extensive library (which is especially important for its French material and for its unrivalled collection of early instrumental tutors) and all his remaining instruments were given by his son William Morley-Pegge as a memorial. 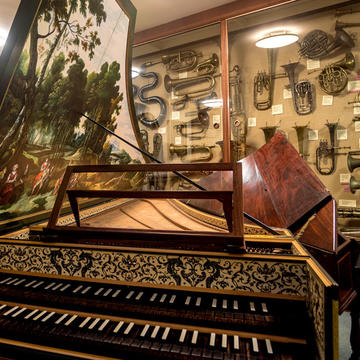 It takes time for any such collection to be accepted by a University. For seven years the initial Honorary Curator was Dr Horace Fitzpatrick, to whose unstinting efforts the eventual acceptance by the University is in great part due. Dr Fitzpatrick maintained his interest and, to take just one example, it is thanks to his initiative that the Collection acquired on indefinite loan the six surviving instruments portrayed in the well-known painting by Zoffany of The Sharp Family, a reproduction of which hangs in the gallery.

There are a number of other long or indefinite loans to the Collection, pre-eminent among which is the Anthony Baines Collection. Dr Baines was appointed the first full-time Curator in 1970.

There is significant group of historical and modern keyboard instruments, including harpsichords, spinets, virginals, early pianos and an important collection of clavichords. A number of these are from the Roger Warner Collection. A significant gift, by the Austin & Hope Pilkington Trust, was of a number of instruments from the Michael Thomas Collection.

There have been many gifts of individual or groups of instruments: for example, Michael Morrow's renaissance basset recorder with the !! !! mark, which was presented by the National Art. This organisation has also given us a rare Grenser bassoon and contributed towards the cost of the wonderful oboe by Hendrik Richters. When William Retford the famous bow-maker died in 1970, his colleagues Mr. Porter and Mr. Yeoman, arranged that all his tools and other material should come as a gift in his memory. In addition, they and Arthur Bultitude established the nucleus of the Retford Memorial Collection of Bows. More recent gifts include, from Dr. George Gordon, the first clavichord by Arnold Dolmetsch.

Since its origins in the 1960s there have been many further acquisitions. With the help of the National Heritage Memorial Fund, the collection acquired the Edgar Hunt Accession, consisting of over sixty instruments, including the world-famous Bressan treble recorder which is the basis of many modern copies; and a number of additional instruments which Mr. Hunt has given, and continues to give, to the Collection. Another major gift was the Javanese Gamelan Kyai Madu Laras (Venerable Sweet Harmony), a complete slendro and pelog gamelan, which was presented by the Minister of Forestry of the Republic of Indonesia, H.E. Sudjarwo in 1985, and which is played regularly.