The Bate Collection has a fine selection of harpsichords, clavichords, early pianos and other keyboard instruments.  Most of them are kept in playing condition and can be used, under supervision.  They include the following types of instruments:

A keyboard instrument, the simplest and at the same time the most subtle and expressive of those whose sound is produced by strings rather than by pipes. The oldest and most enduring type of clavichord is ‘fretted’, in which a given pair of strings may be struck by more than one tangent, producing two, three, or even four different notes according to the distance from the bridge, but only one at a time 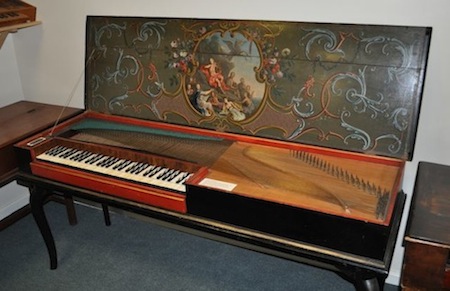 A stringed keyboard instrument, classified as a box zither; it is distinguished from the clavichord and the piano by the fact that its strings are plucked rather than struck. It is also used as a generic term (equivalent to Ger.Kielklavier or Kielinstrument) to include not only the wing-shaped instrument but also other forms such as the clavicytherium, spinet and virginal.

LIST OF HARPSICHORDS, SPINETS AND VIRGINALS IN THE COLLECTION

The piano has occupied a central place in professional and domestic music-making since the third quarter of the 18th century.  The square  piano is an instrument with a horizontal string arrangement, usually in a rectangular case, although the term is also used for some pianos that  are in the form of a harp lying on its side, reflecting the decrease of string length from bass to treble in the case outlines. From its invention in  the mid-18th century, and throughout most of the 19th, the square piano was the most common domestic keyboard instrument, and it was only  gradually superseded by the space-saving and generally superior upright. 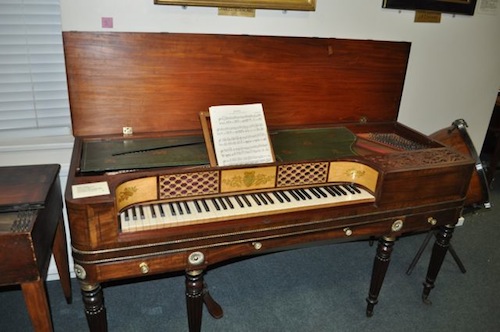 The name given by Alexandre-Francois Debain  to a small Reed Organ patented in 1842. This original instrument had a three-octave keyboard, one set of reeds and a single blowing pedal. The name was later extensively used in England and on the Continent to refer to all reed organs, of whatever size or construction.

The name said to have been given by Benjamin Franklin to the fortepiano à cordes de verre, a crystallophone invented by Beyer of Paris c1785. The instrument consisted of a series of glass bars with a three-octave compass, variously given as c to c‴, f to f‴ and g to g‴, laid horizontally on a thick cloth strip and struck from above by small wooden cloth-covered hammers controlled by a keyboard.