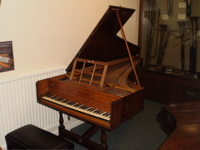 Little is known of William Smith save that he was apprenticed to Benjamin Slade in 1709, probably in succession to Thomas Hitchcock. Like Tisseran it shows the connexion with spinets in its diagonally set soundboard. An affinity with Hitchcock is shown by the skunktail sharps, a graphic term to describe keys which are striped like the tail of a skunk with a longitudinal sandwich of ebony-ivory-ebony. However, the tail of the case is the normal English shape, not the rather Germanic curve which Hitchcock employed on his only surviving harpsichord.

This harpsichord is single manual with a range GG-g''', 5 octaves, the normal spinet compass of the period, with 2 x 8' ranks, the bass being fully chromatic. The naturals are ivory, with skunktail sharps; two steel stop levers pass through the front-board and have brass knobs of slightly unusual shape; each controls one of the 8' ranks; the soundboard grain is diagonal to the spine, as on English spinets. There are three pierced brass hinges to the lid, with three S shaped hooks to retain it shut. There are four pierced brass hinges to the front flap and four more to the front half-flap. The case is walnut, with sycamore veneer to the interior. The spinet-type trestle stand with four baluster-turned legs may be original, though it does not exactly match the width of the instrument; it is certainly contemporary.

The nameboard is marked Gulielmus Smith Londini Fecit (illustrated in Boalch, op.cit, plate 4) and on stylistic grounds a date of around 1720 has been assigned. The name is in a cartouche with rounded ends.

There is an uncannily close resemblance between this harpsichord and that on which Handel is leaning in the portrait by Philippe Mercier. Michael Cole, who first noted this resemblance, has published a detailed article on it in Early Music (February 1993; the Mercier portrait is the cover illustration for that issue). All the most unusual features of both the instrument and the painting correspond, and while some of these also appear in the work of other makers, it is only with the painting and the Smith that all appear.

The instrument came to us as a bequest from Mrs Audrey Blackman of Boar's Hill in memory of her mother, Hilda Seligman, to whom it had belonged. It has not yet been possible to trace any earlier provenance other than that it was probably purchased in London in the early 1920s.