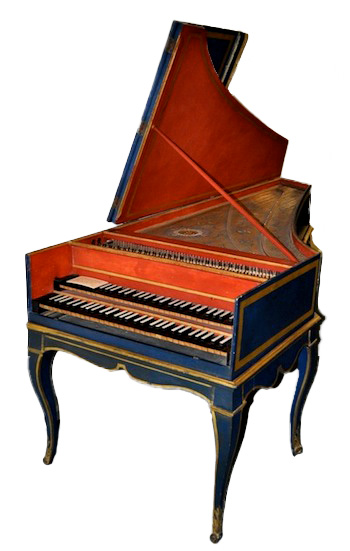 DOUBLE MANUAL HARPSICHORD by Jean Goermans the elder, Paris, 1750 (dated on one of the jacks).  Five octaves, FF-f'''. 2 x 8' ranks and 1 x 4', with a buff batten of soft leather pads, which can be slid against the upper manual 8' to alter the tone.

This is a particularly fine example of the typical mid-18th century large French harpsichord, with the soundboard grain running parallel with the spine (unlike the Tisseran), and with a decorated soundboard. It is the type of harpsichord for which François Couperin wrote, and many performers today regard such instruments as the best harpsichords for most 18th century music. This is undoubtedly true for French music, but it is arguable that, since each national type has its own characteristic tone quality, one should use a German instrument for Bach, an English, such as the Tisseran or the William Smith here, for Handel, and so forth.

Goermans was of Flemish descent, as were many of the greatest harpsichord makers of the previous century, but he spent all his working life in Paris, where he became a Master before 1730.

This instrument is said to have come from the Château de Landres, Mauves-sur Nuigle, France, where it is thought to have been since the 18th century.  It has been restored by Christopher Nobbs as nearly as possible to its original condition.  From the Michael Thomas Collection, given by the Austin & Hope Pilkington Trust.

The instrument has the range FF-f'''(61 notes), 5 octaves, originally FF-e''', enlarged by cutting away keyboard end-block at treble and inserting extra key