Cornets originated in France in about 1820, when the instrument was developed from the coiled post horn. Unlike the trumpet, the cornet has a mostly conical bore, which gives it quite a different tone to that of a trumpet. The earliest cornet on display dates to 1830 and was made by Marcel August Raoux. It has two piston valves and a G crook. A cornet dating back to 1845 by George MacFarlane demonstrates his clapper key, which improved trills and was patented in the same year. Cornopean was the early name for a cornet, many of which used the Stözel valve system.

One of the most popular cornets in the collection is the Echo Cornet by Brown & Sons of London, dated about 1895. It has a fourth valve that diverts the playing length of the instrument to an integrated "mute bell". This feature could provide the effect of the instrument playing near and far and was used in comic opera and other light entertainment pieces. 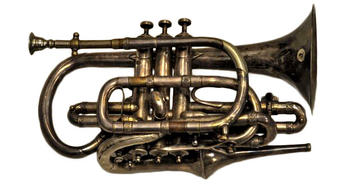