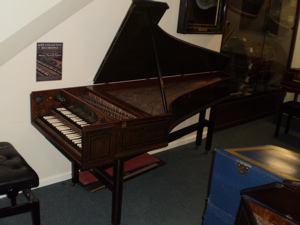 This is the earliest surviving English double-manual harpsichord. Sadly nothing is known of Joseph Tisseran save his name, nor is any other instrument of his preserved. It is a probable that he also made spinets since the soundboard grain of this instrument is, like that of a spinet, oblique to the long side. It has been suggested that perhaps he made this harpsichord for his own use in 1700 and was then prevailed upon to sell it in 1712. Thereafter, the whole provenance of the instrument is known, for the documents of its original sale in 1712 to Edward Hanford at Woolas Hall near Pershore are preserved. It remained there until 16 December 1949, when it was sold at Sotheby's to Tom Burn of Rous Lench Court, Evesham. It was sold, again at Sotheby's, at the Rous Lench sale, 7 July 1986, lot 973, when it was bought by Michael Thomas. It was presented to the Bate Collection, with other instruments from the Michael Thomas collection, by the Austin & Hope Pilkington Trust. 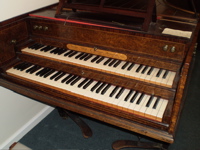 The mark on the nameboard is Josephus Tisseran Faciebat Londini; this is also inscribed below the keyboards in ink, with the date 1700, which has been erased and changed to 1710. The lengthy quotation in Boalch is wrong; David Law has provided clear photographs, taken under differing lights, which prove beyond doubt that the original date was 1700, and that attempts were made to erase the first 0 and replace it with a 1. It can only be presumed that it was deemed advisable to make it appear to be a fairly new instrument when it was sold in 1712. The front face of the wrestplank is inscribed Josephus Tissern [sic]Londini.

The range is 4 octaves, GG/BB-d"' with split Eb to give both BBb(front) and Eb (back); the disposition is now 2 x 8' doglegged + 1 x 4' with three stops, but the original disposition was clearly with a shove coupler, for traces of the coupler dogs remain on the lower-manual keys. Whether this conversion was done at the time that the date was changed, or rather later in the eighteenth century, is debatable. If the former, it would be earlier than this disposition is usually considered to have been used, but that in itself is not necessarily against it.

The dogleg refers to the front row of jacks which are full width in the upper part of their length, and narrower in the lower part, looking a little like a dog's hind leg. The resulting knee rests on the end of the upper-manual key, the bottom of the jack resting on the lower-manual key. Thus this rank can be played from either manual, whereas the back 8' rank, and the 4', can only be played from the lower. A stop lever to each rank moves it away from the strings, that for this rank on the right, and those for the 4', which is the rearmost rank rather than being in the middle as it is on French harpsichords, and the back 8' on the left, and thus each rank may be silenced. However, if this doglegged rank is 'on' it will always sound because, since one cannot move either manual, whichever manual one uses, the front 8' will be played. As a result the available contrasts are more limited than they are with the shove coupler.

The naturals are ebony and the sharps ivory, some of them very badly stained; there are embossed gold paper key fronts. The soundboard painting, probably by same hand as the Coston harpsichord in Edinburgh (according to Dr Grant O'Brien) which is illustrated on the front cover of the Sotheby sale catalogue for 13 November 1987, is not only very elaborate, but quite exceptional; there are only two or three English harpsichords in existence with such elaborate and stunningly beautiful decoration. The outside of the case is painted to imitate panelling, with gold spangles in the paint imitating Chinese lacquer. Peter and Ann Mactaggart found traces of blue paint under this, and it is possible that the soundboard may have been painted and the exterior repainted in 1710–12, or, if the change of coupler system were later, at that period. The stand is a trestle of spinet type, painted to match the case but much inferior, and is clearly much later in date; it has castors on the legs. The lid has four brass hinges with removable wire axle pins with bent-round ends. There are four brass hinges for the lid flap and four for the front flap. All the chains and pins are missing from the five lock plates on the bent side.

The instrument was exhibited at the Galpin Society's 40th Anniversary Exhibition at Sotheby's in 1986 and is illustrated in that Catalogue.