This instrument was made in 1666 by trumpeter Simon Beale. During the civil war and the Protectorate Beale was state trumpeter to Oliver Cromwell. Following the restoration of the monarchy he was appointed as state trumpeter to Charles II. This instrument shows design features that suggest that Beale had done some collaborative work with Charles' other main trumpeter, Bull, who had accompanied the king during his exile in Europe and had picked up many continental fashions.

In later life it became the "luck" of Woodenham Hall. During the late 19th and early 20th century it was used by the butler to summon the house and guests to dinner. 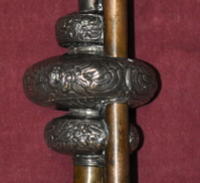 In its current form the instrument has been soldered together so that the joints cannot be removed. Analysis of the metal has shown that the bell is probably not original, although use of the profile in copies has shown that it works very well indeed. The mouthpiece is very large (almost the size of a trombone mouthpiece) and is also soldered to the mouthpipe. X-Ray analysis has shown that it has no back-bore which means that modern players have great difficulty with intonation. Despite this, it has been used in recent years and formed part of fanfare march for the Dean and Chapter of Canterbury Cathedral during the celebratory service marking the centenary of the Art Fund.