This instrument was made in about 1720 by the celebrated baroque recorder maker Pierre Jaillard, also known as 'The Bressan'.  He earned this soubriquet as he came from Bourg en Bresse, the capital of Ain province near Lyon in South-central France.  At the age of 15 Jaillard was apprenticed to a local woodturner but he left after two years.  It is not known where he learned his instrument making skills but it is speculated that he studied in Paris along with his contemporary Rippert.  He moved to England in 1688 and accompanied William III to the Netherlands as one of the Kings 'Hautboys'.

This instrument came from the collection of Edgar Hunt.  It had been kept in his flat in London which had been bombed during the blitz.  Hunt returned to the site some days after the event and, whilst poking about in the rubble, was overjoyed to find the instrument wrapped up in an old shirt. 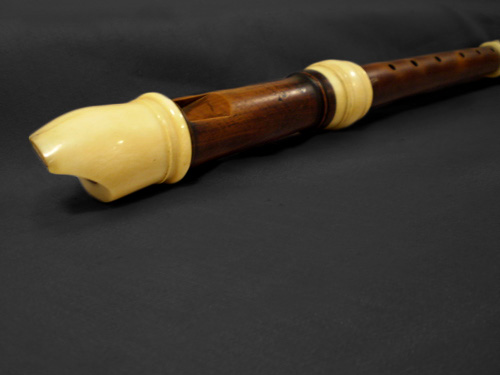